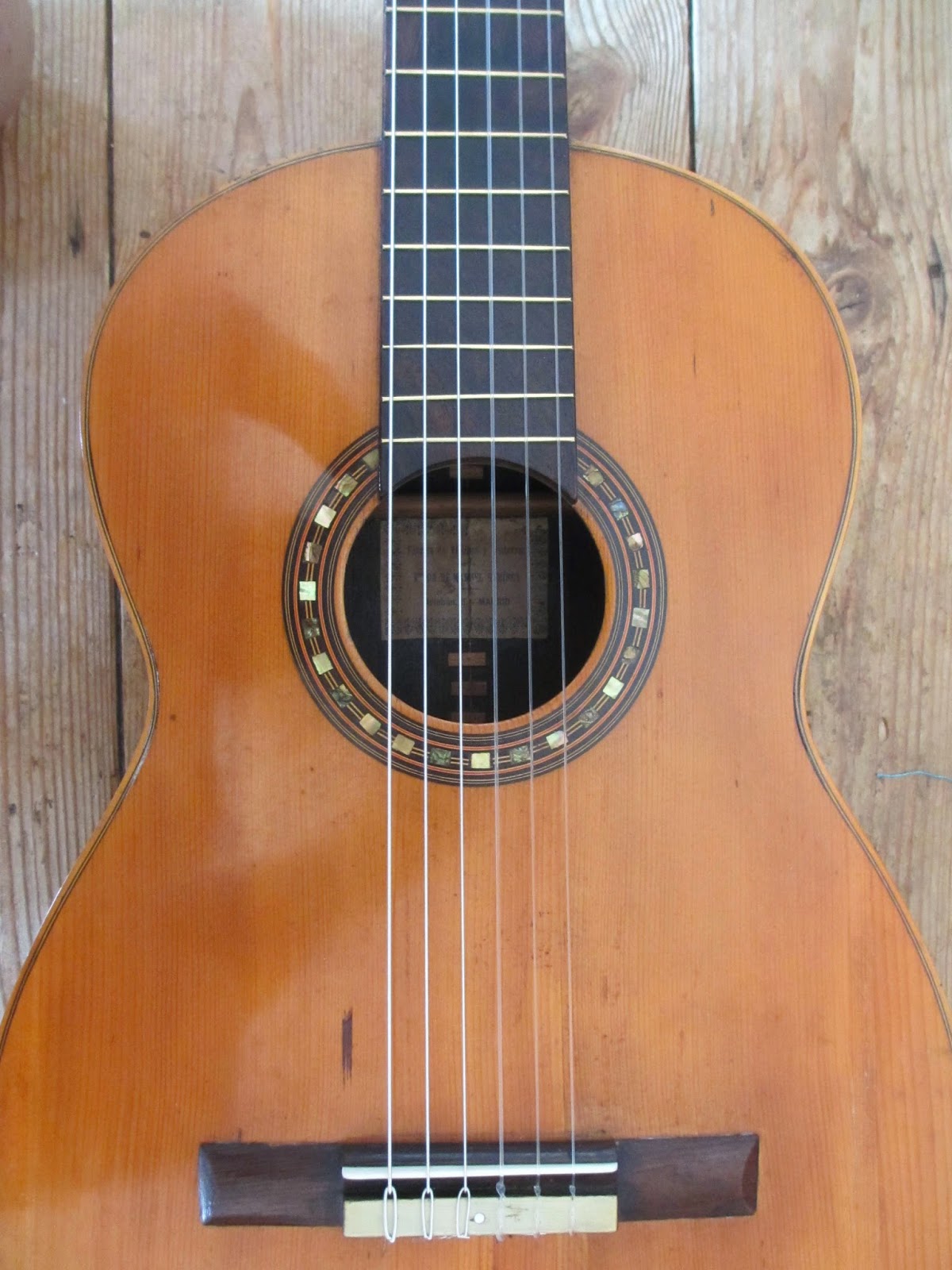 I've recently finished restoring this small Manuel Ramirez guitar, built in 1919 by Modesto Borreguero. After Manuel Ramirez died in 1916 his widow kept his workshop going with the assistance of Santos Hernandez, Domingo Esteso and Modesto Borreguero. These instruments carry the 'Vuida' (widow) label. Santos and Domingo Esteso left first to continue making under their own names; Borregero was the last to leave in the early 1920's. It is fair to say that Borreguero is the lesser of the 3 makers. Later on he was to train (and be surpassed by) Hernandez y Aguardo and Vicente Camacho. He enjoyed a long life, dying in 1969. 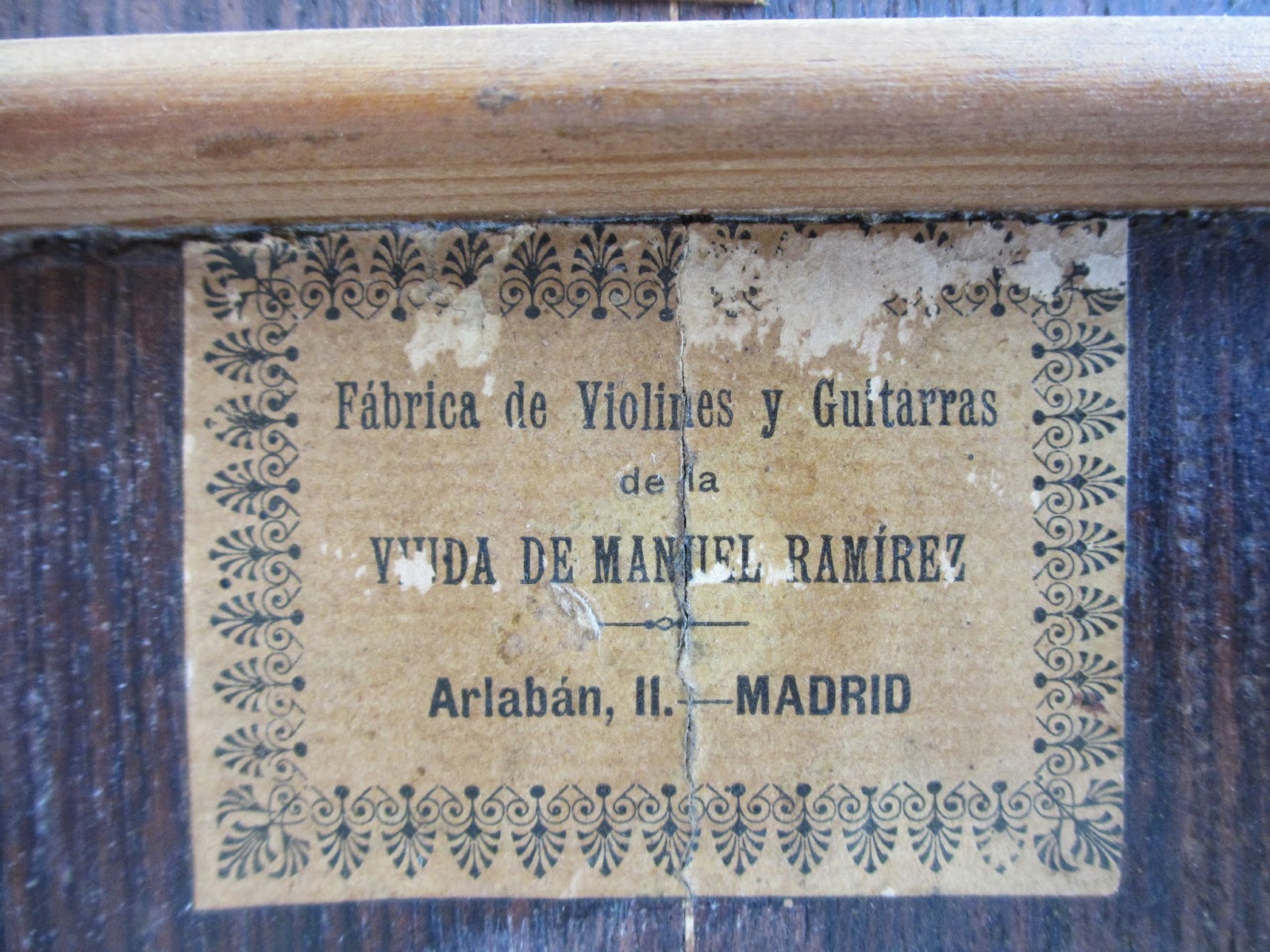 This is a small guitar, with a scale length of 634mm and was perhaps intended as a 'ladies' guitar. The back and sides are of Indian rosewood which was unusual for this time. The guitar is simply and in places roughly built, but in spite of this has survived very well; the damage can be attributed to careless owners, rather than poor workmanship.
This guitar had already been extensively repaired at some point in the past; the top had some large inserted patches, and at some point rear mounted steel string type tuners had been fitted. Initially I hoped to repair some loose back braces through the soundhole, but closer inspection revealed that the removal of the back was the only effective way to proceed, as many bars, top and back, were unglued. I also took the opportunity to make a working drawing of this instrument. I intend to make this drawing available for download in the near future. 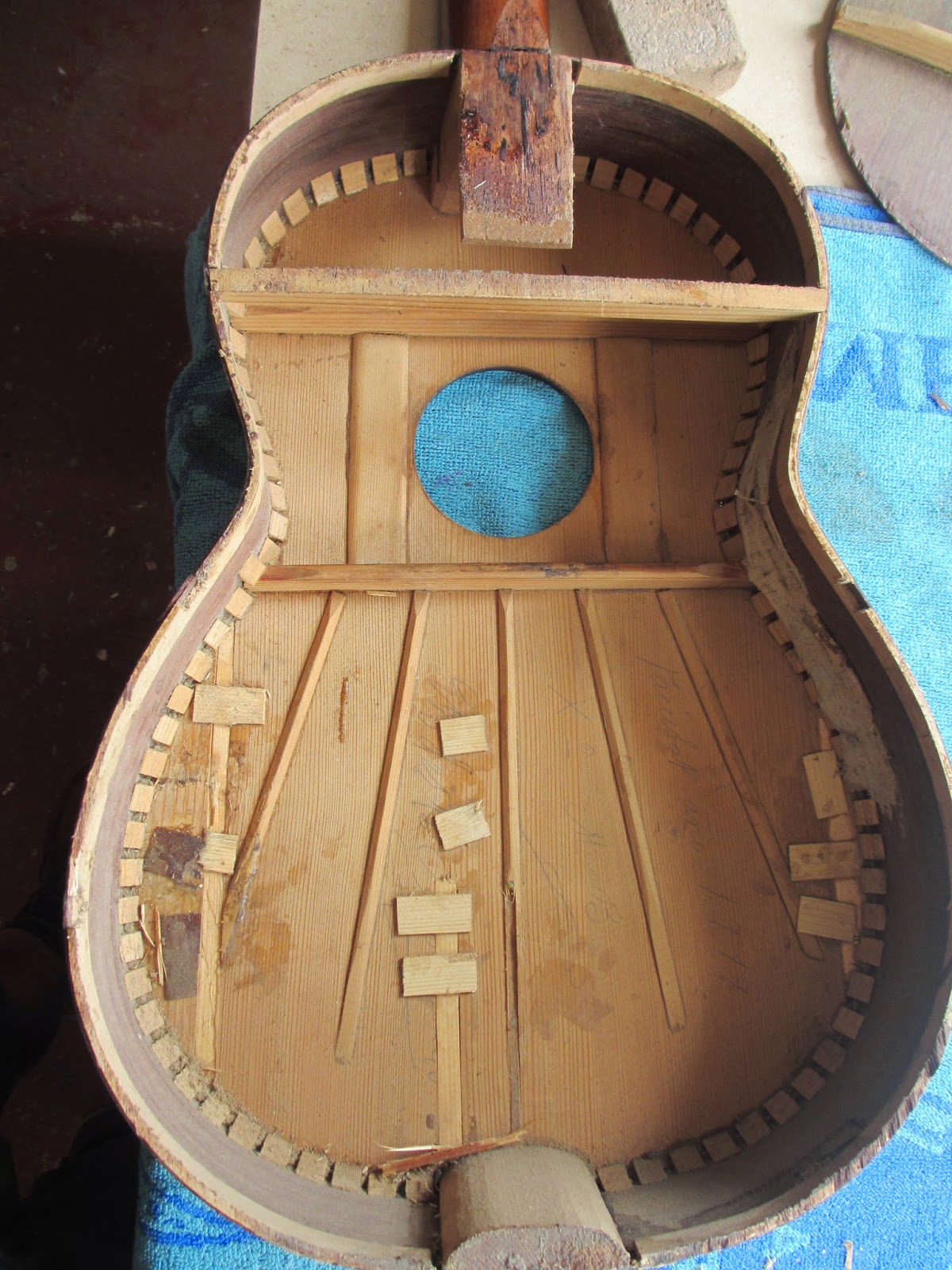 (The inside of the guitar prior to restoration)

The back bindings came off cleanly as did the back itself, and to my delight there was a signature and date on the inside of the soundboard. For me it was one of those poignant moments; Borregueros signature bold and assured, signed with a flourish just before the back was glued on nearly 100 years ago. I went to my reference books and found that picture of Manuel Ramirez and his staff outside his shop and there was Modesto Borreguero in his carpenters apron looking solemnly at the camera. 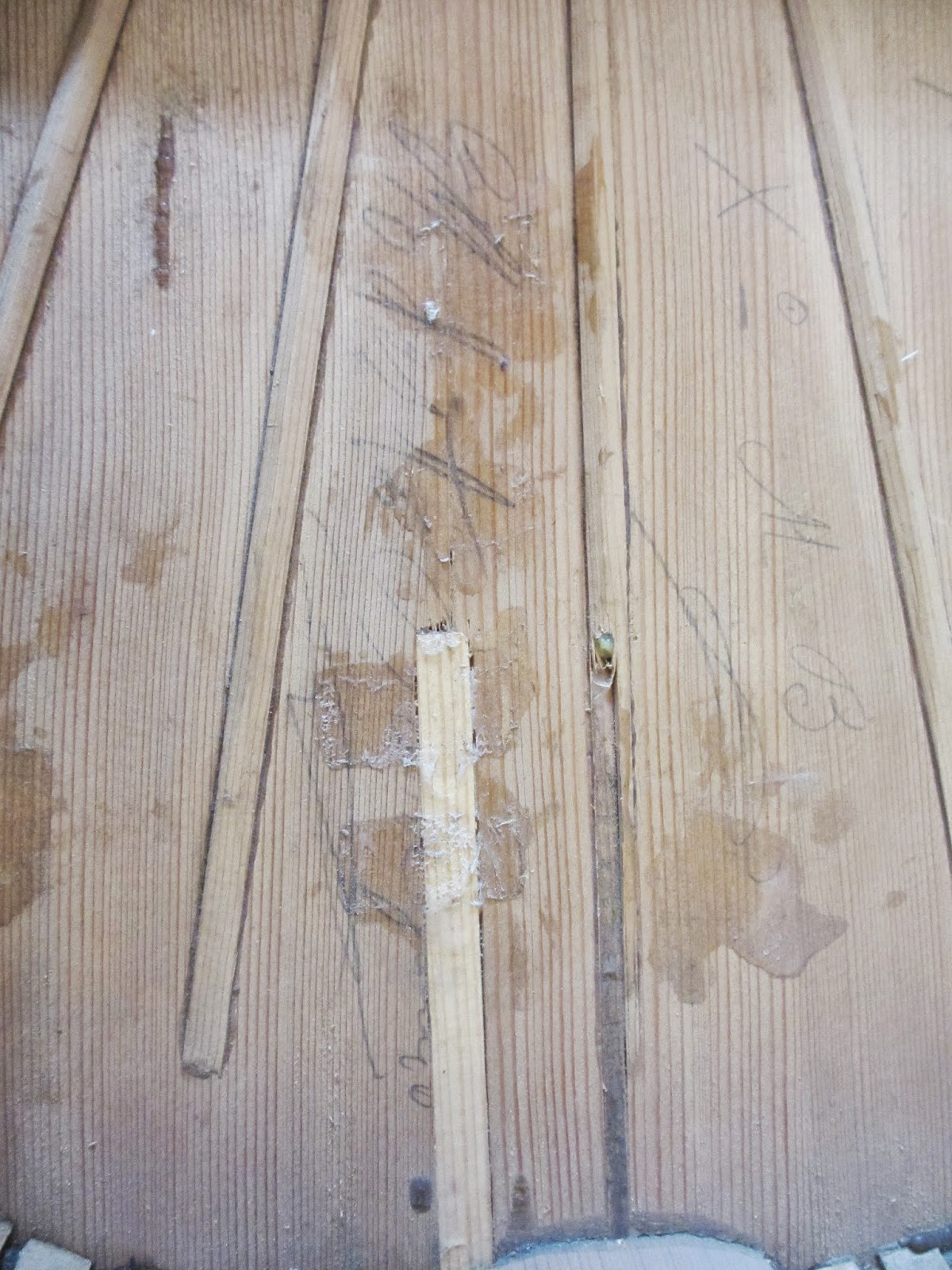 I took off the crudely installed cleats and replaced with linen strips. The centre strut needed partially replacing and the 2 harmonic bars needed regluing. All the back bars were removed, cleaned and reglued and some of the centre seam cleats were replaced. I also renewed a side split that had been badly repaired in the past. The back was refitted and glued and the binding reinstalled. A new set of ebony pegs was fitted, bone nut and saddle shaped and the guitar was playing again. The sound is warm and dark and whilst this modest instrument is never going to be a grand concert guitar, it has a charm of its own. 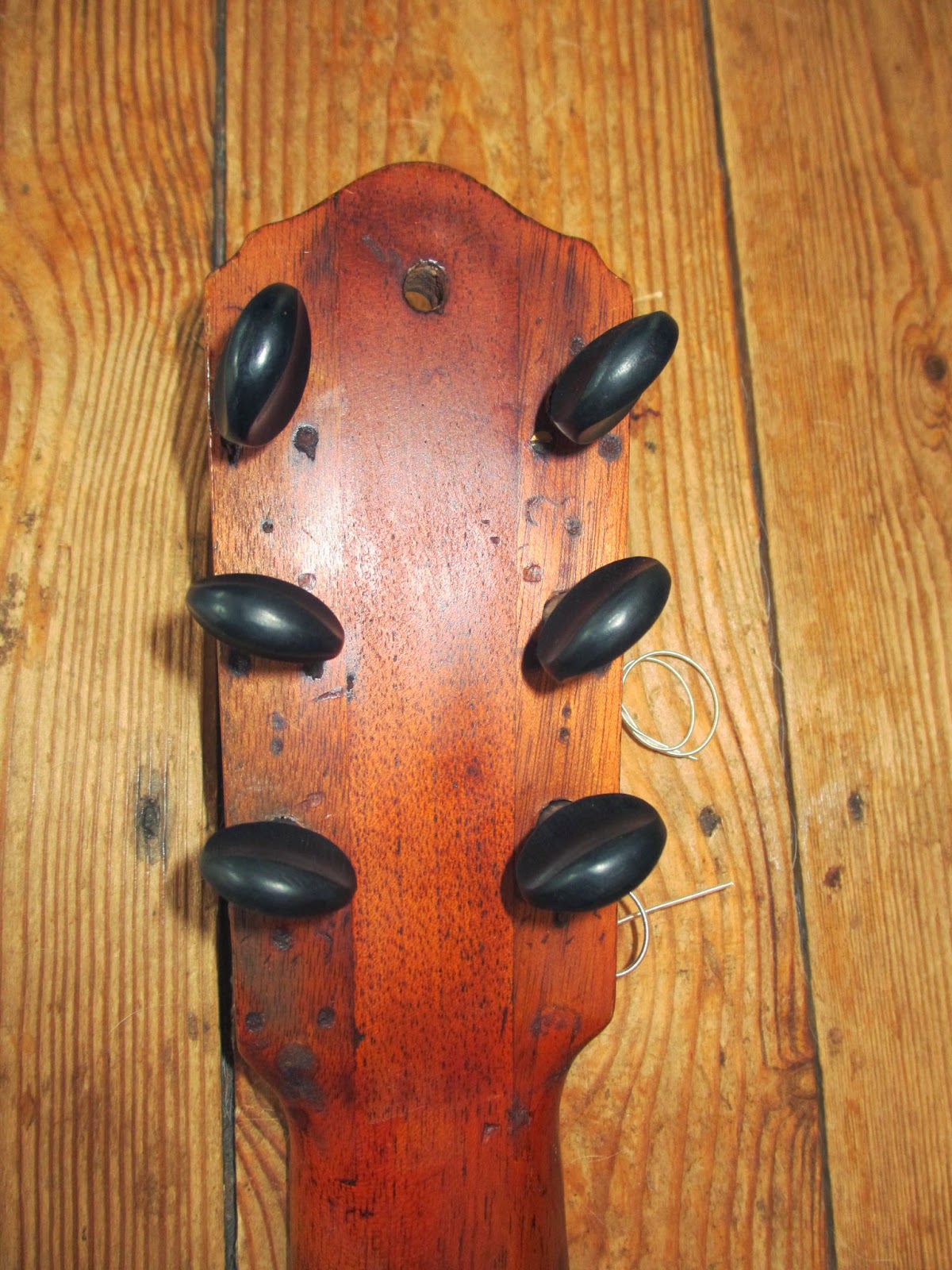 This is the second Vuida de Manuel Ramirez I have featured in this blog. You can read about the 'S.H.' Ramirez here.
Posted by David Whiteman at 19:39 No comments: