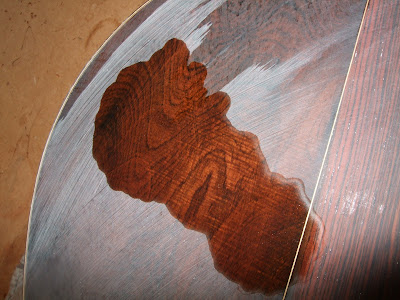 Polishing is nearly complete on the rosewood/cedar guitar. Cutting back, which is the process of fine flattening of the surface, is a job that rarely thrills me. Today, however, the water used on the abrasive paper lit up the warm grain underneath and spurred me on to finish the guitar.
Posted by David Whiteman at 22:22 No comments: 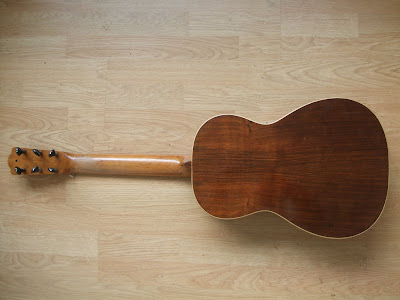 Vincente Arias
This guitar came in with little warning but rarely am I so enamoured with a guitar as with this one. Vincente Arias was working in Spain in the last part of the the 19th century and into the first decade of the 20th. They are rare finds indeed and this one is in fantastic original condition, even down to the brass frets. The rosewood is prime Brazilian and I love the polish on the soundboard - so fine and clear. Built so lightly it seems to tremble as you pick it up and work on it. 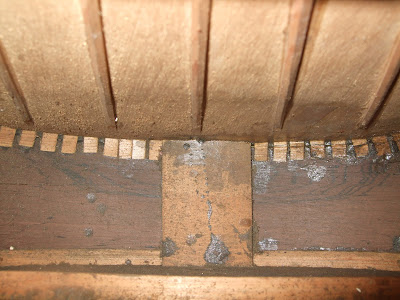 I have not had to do much to this instrument. The bridge had lifted over time and so was carefully removed, cleaned and then re-glued with hot hide glue. At some point the guitar had been dropped and this had put a large split in the bass rib. This has now been cleaned and glued. You can see some damage to the tentelones and glue from some previous repairs. 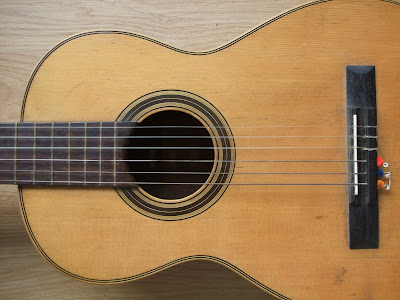 Simple, but very beautiful to the eye and that, as it transpires, is how it sounds too. Last night I returned it to Jim and had the pleasure of hearing accomplished guitarist, Adrian Rius, play this guitar. Adrian was returning FE 18 after the Tarrega exhibition in Spain, so Jim and Ging provided a fabulous evening of food and music. Nice to see Pablo Requena there too. Not only is Pablo a fine guitar maker but he can sing as well! Great stuff. And so the evening ended with Adrian playing 2 Torres guitars and the Arias. The guitars sounded better than ever and the playing was delicate and haunting. I left clutching the remains of a bottle of 1970 Fonseca's port (thank you Jim) and with Tarrega and Torres (and Arias) ringing in my ears.
Posted by David Whiteman at 21:42 No comments: 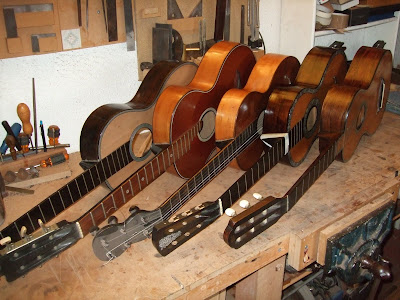 A fine collection of old guitars that are in the workshop at the moment. At the back of the workbench in the Davis, then the maple Weissgerber. An anonymous Austrian(?) guitar is next then an unlabelled French guitar. Finally at the front (and so it should be) is a Rene Lacote. 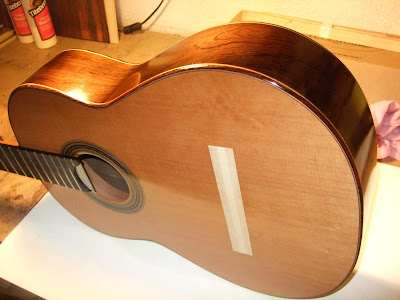 Polishing is under way on this cedar and rosewood guitar. I love French polish as a finish and it seems wholly appropriate for a top classical guitar. I have nothing against a well applied synthetic finish, and many fine guitars are lacquered with cellulose for example; it's just the feel and appearance of shellac feels right for my guitars. This guitar is about halfway through the polishing process. I have built up a 'body' of polish and I will spend the next couple of weeks putting on thinner and thinner coats before working the surface to a high gloss.

Posted by David Whiteman at 22:46 No comments: 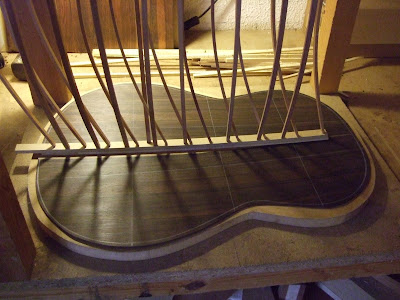 There is a lot to do this week so into the workshop early. I am now under way with this exhibition guitar in spruce and Malaysian blackwood - this is the back reinforcement strip being glued on in the go-bar press. Using this always reminds me of my tutor Herbert Schwarz. Herbert used to tell me how, when he worked in a piano factory, they used a much larger go-bar press to glue the bars onto piano soundboards.

Posted by David Whiteman at 21:53 No comments: 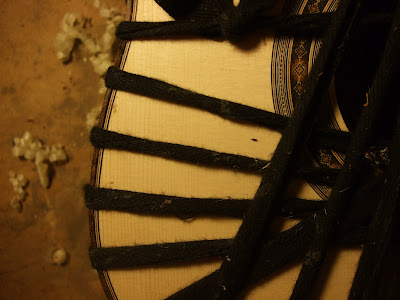 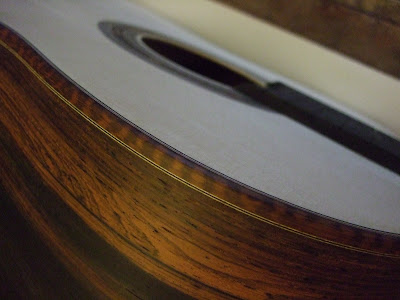 Saturday, and time to do things other than guitar making. Playing with the children, baking blueberry muffins and feeding the chickens. I wake to find one of our children has slipped into our bed, and as I open my eyes I see this perfect creature washed up by the soft nocturnal tide. He pings awake and is off to find adventure and breakfast. The workshop isn't completely off limits so some more polishing takes place. Frank calls in on his way West and sets up his first guitar - sounding as good as ever. I take the opportunity to sort out Gordon's guitar which I will get back to him after the weekend. Finally, a picture of the Weissgerber having its bridge glued on. 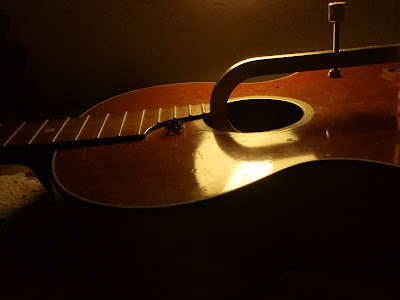 Posted by David Whiteman at 19:30 No comments:

The subject of wood has been troubling me for some time. It really is such a wonderful material and I feel privileged to use it. I recently had the opportunity to buy some nice Madagascan rosewood which many makers have been inclined to see as a substitute for Rio rosewood. It was being offered fairly cheaply and seemed of good quality but I just couldn't buy it. Look at the situation in Madagascar (the internet is a wonderful thing) and you will see why. It is ironic that the devouring of Madagascan rosewood is directly linked to the ban on Brazilian rosewood. At the moment I am keen to salvage timber of high quality. The latest acquisition was a late Victorian headboard which yielded 3 sets of stunning Cuban mahogany. I'm not sure what I will use that for yet....
In the workshop restoration on the Davis continues and the Weisgerber is nearly complete. A rosewood Lacote has just come in to add the my collection of restoration projects: no rush with that one though and it needs a lot of careful thought.
The 2 latest guitars are going to be ready for polishing within the next week, with just fretting and bridgemaking in the way. I already have one cedar/rosewood guitar being polished, so soon the workshop will be filled with the fragrance of shellac and alcohol.
Posted by David Whiteman at 20:37 No comments: