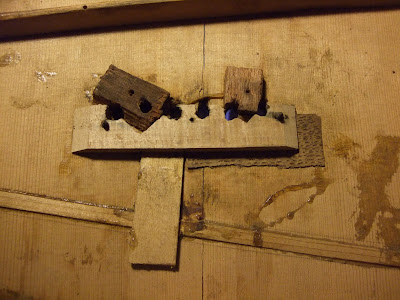 Restoration of guitar by C & W Davis.
This was found under the bridge when the back was removed - a collection of roughly shaped blocks intended to 'repair' the bridge area. All these have now been removed.
Posted by David Whiteman at 22:50 No comments: 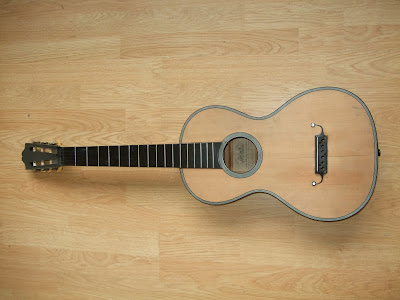 Guitar by C & W Davis before restoration.
Posted by David Whiteman at 22:47 No comments: 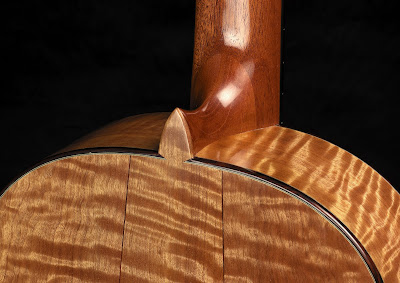 ( Above - Whiteman Spruce/Satinwood guitar. Picture by Malcolm Maxwell/Crisp Litho.)
A day spent restoring with little time for my own guitars. I am working on 2 guitars at the moment - a Weissgerber, circa 1920, and a R & W Davis from the mid 19th century. The Weissgerber requires minor work on the whole, although the bridge needs rebuilding. The Davis, on the other hand, has had to be opened as all the internal strutting was loose.
When the back came off the extent of previous repair work was evident. Lots of crudely glued blocks and lashings of PVA. So much time in restoring is spent taking things apart in order to reassemble them correctly. Both these guitars are owned by an accomplished player, so these instruments will be returned to full concert condition.
I had a lovely 1954 Martin D28 in the workshop today. It needed rather a lot doing to it, including finishing issues that aren't my area of expertise, so I was happy to pass that one on. Nice to see however, and the Brazilian rosewood was sumptuous. My day ended with gluing up some snakewood bindings for one of the two guitars I have on the bench at the moment. More of them later......
Posted by David Whiteman at 20:56 No comments: