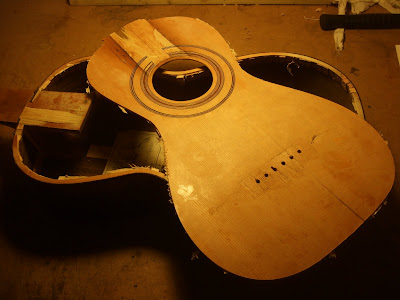 Rebuilding this copy of a Panormo guitar is a project that I have been working on for the past year, when I have had an occasional bit of spare time in the workshop. It is something that I have been meaning to do for years but it has always got pushed to the bottom of the list.
I originally built this guitar in 1991 as a way of learning more about the guitars of Louis Panormo, and to extend my repertoire as a guitar maker. Having completed the guitar and proudly strung it up for the first time, I quickly lent it to a player for some concerts. Sadly, he almost immediately dropped it and it was returned to me with the soundboard irreparably damaged. Having put all that work into building the guitar only to see it smashed ensured that I didn't have the heart to repair it, and so I put it in a corner and forgot about it. There have been several occasions since then when I have been close to throwing it away, but have never quite managed to do so. I am pleased to say that it close to being strung up again. 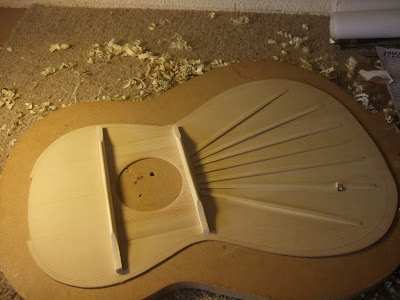 Had this been an original Panormo I would have repaired the soundboard, but with this modern replica it was preferable to replace the soundboard. I hadn't been happy with the original soundhole embellishment so this gave me the chance to produce something a bit better. The picture above shows the new soundboard just before I glued it to the body of the instrument. 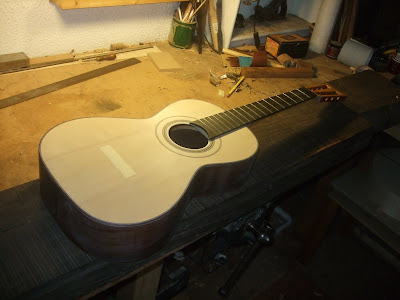 I'm pleased to say that this 'new' guitar is a considerable improvement on the original instrument I made and I am very much looking forward to stringing it up again. The polishing is complete and the bridge is glued on; I am just waiting for tuners.

I haven't found a new owner for this guitar yet but I hope that this time it will be looked after properly.

(This guitar has now been sold)
Posted by David Whiteman at 14:07 No comments: