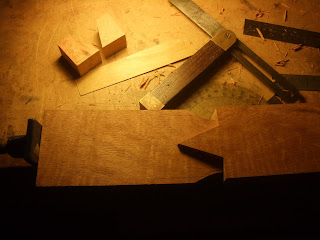 Here are the first pictures of Julio's guitar which is a Hauser type instrument in spruce and rosewood. With the top and back joined up, I thought I would complete the neck and for this I have chosen some rather striking figured mahogany. It was cut from some extra thick stock which I needed for the v-joint that had been requested.
As a sixteen year old, I was fascinated by the book 'Guitars-From the Renaissance to Rock' by Tom and Mary Evans. It included a photo essay on a youthful Jose Romanillos in his workshop. There were detailed pictures of Jose making a v-joint but it was some time before I attempted this technique for myself. 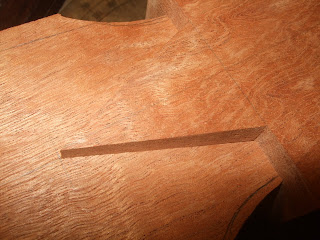 Once I was at the London Collage of Furniture I had no excuse for not making one of these head joints. My first v-joint took forever and probably wasn't the best in the world, but I was proud of it. At the time I was making it we had a visit to the workshop by the esteemed Spanish guitar maker Paulino Bernabe, who was brought along by that great figure of the English guitar scene, Ivor Mairants. Bernabe was communicating through a translator (Jeff Giddings, the workshop technician. Jeff was a keen fiddle player, instrument maker, Morris dancer and many other things.) Bernabe stopped at my bench and I could here him and Jeff deep in conversation about my work. Not speaking Spanish myself, I imagined the great Luthier to be commenting on my great skill, particularly for one so young. Perhaps he would even offer me a job in his workshop...
After the visitors had gone, I rushed up to Jeff and eagerly asked what Paulino Bernabe had been saying about my v-joint. Jeff laughed as he told me; 'he wondered why you were bothering!'
Bernabe had a point as the commoner scarf joint is so much quicker to accomplish and that's the head joint that I do as standard. Every so often it is nice to do the v-joint as it shows your technical skill as a chisel master, but in a restrained and subtle way. I like that - a quiet and gentle flourish. Today I am expecting to take delivery of a set of tuners from Nicolo in Italy and these are to be fitted to this head. This will be a striking guitar in many ways.
Posted by David Whiteman at 17:00 No comments: 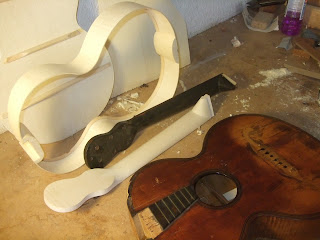 My copy of the Ries terz is coming on quite nicely. Making this guitar is an indulgence on my part and I only work on it late at night or when something in the workshop is gluing. I am enjoying doing something a little bit different; it makes you re-evaluate the main body of your work and you always learn something. The thing that has absorbed me so far with this guitar has been the considerable arching on the back. Even by 19th century standards this is quite considerable and makes fitting the back more problematic. The back on the original guitar is solid maple and not spruce veneered with a decorative timber, as was often the case. I need to push on with this as Jim is cracking on with the restoration of the original and it might not be in the workshop much longer. This picture really shows the difference in colour between the aged spruce and maple, and the new wood. 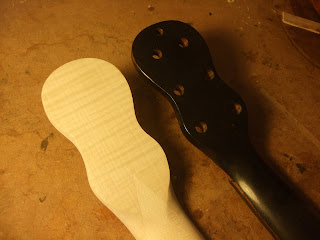 I have very much enjoyed doing the neck on this instrument. The figure of 8 peghead always pleases me and the v-join is always a challenge. The original neck is maple, but then ebonised with black French polish, which was used to mimic ebony veneer. In places the polish has worn through to a reveal a sumptuous golden maple underneath. I am itching to polish my reproduction neck black.
It's the weekend so I am out of the workshop. Disturbed and troubled by the scenes of devastation from Japan, I have gravitated towards a gentle and quite day with family; a 12 mile bike ride along the coast followed by cake baking with the children on my return. The spring-like weather is fabulous, but is not always conducive to getting things done in the workshop.
Posted by David Whiteman at 16:53 No comments: 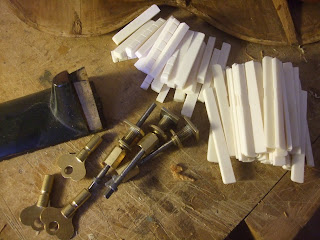 I like getting parcels delivered and this week I received loads of nuts and saddles through the post. The bone is really nice quality; not porous or chalky like some I have seen. A month or so ago I took delivery of some sets of neck adjustment screws for Staufer type guitars as I intend to make one some time this year for my own amusement. These mechanisms are made by Rubner in Germany, who also make tuners, amongst other things. It was a pleasure doing business with Rubner; efficient, knowledgeable and friendly. 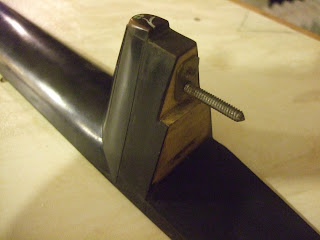 Here is an example of a Staufer neck that I saw recently. The neck adjustment mechanism is virtually identical to the ones that I have just purchased. Really it is quite a crude mechanism and I have seen rather more sophisticated ( and stable ) adjustment systems on Lacote guitars. The neck is loose in the neck pocket and is held in place by the screw and the wooden locating tongue that you can see in the picture. If you loosen the nut in the heel, using the clock key provided, string tension pulls the neck forward, and the action is raised. Tightening the screw therefore lowers the action. 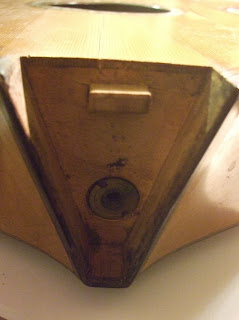 Posted by David Whiteman at 16:46 No comments: