Workshop in the depths of winter... 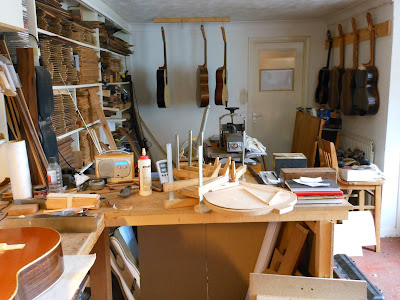 Today is the winter solstice and that marks the time when I start to wind down in the workshop, for a few days at least. I can never resist sneaking off into the workshop for long though. I am going to regrind many of my edge tools, put some new shelving under the work benches, make some bridges and get 2 guitars set up and strung. Oh, and polishing of course...

And so, I wish you seasons greetings, and thank you all for your interest and support over the past year, and leave you with this link to a Christmas song, sung by Kate Rusby. She plays a guitar made by the fine English guitar maker, Peter Barton, one of those rare makers who has gained respect as a builder of both classical and steel string guitars.
Posted by David Whiteman at 16:02 1 comment: 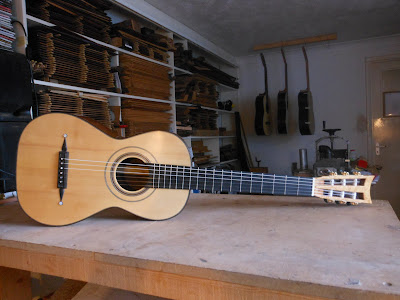 I recently finished this Panormo copy, the full story of which can be found here. I'm delighted with this guitar, both in terms of its sound and playability. It is a fairly accurate copy, if copy is the most appropriate term. Perhaps replica or facsimile are better, or just 'guitar in the style of...'? There are some differences from the original, such as the choice of Indian rosewood for the back and ribs, and the back is solid rather than rosewood veneered onto pine, although some Panormos featured this style of construction. 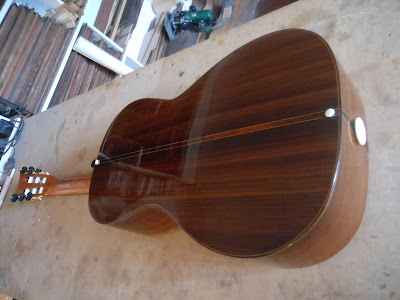 Although not usually required by modern players, the turned bone or ivory strap buttons are an unusual and distinctive feature of Panormo guitars. The 2 small buttons mounted on the back were intended to have an old guitar string strung between them, which could then be rested on a belt buckle or something similar, thus supporting the guitar. The large end button would have held one end of a strap; the other end being tied to the headstock. 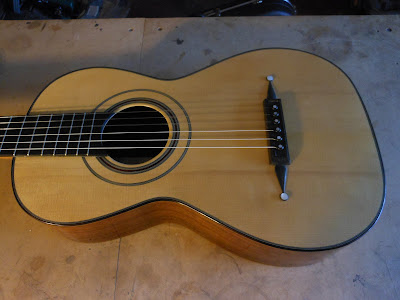 Many 19th century guitars feature pin bridges, where the string is held in place by small wooden pins, rather than being tied as they are on a contemporary guitar. It is these differences that make this type of guitar so much fun to make, as they represent a subtle change from the guitars I normally build. A Panormo bridge is really rather more complex than a modern bridge, and is very distinctive and unique. 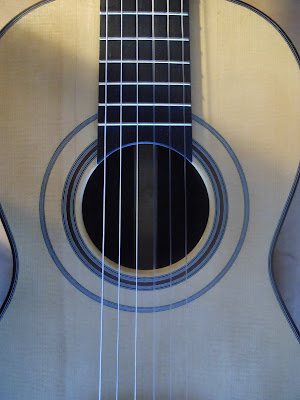 The top model produced by the Panormo workshop featured mother of pearl embellishments in the rosette but I opted to go for the all wood version. The picture above shows the guitar strung, but the label is not yet installed.

The picture below shows the end button, which is much larger than anything you would see on a modern instrument. Many years ago I acquired some old and broken chess pieces, and I have fabricated this button out of one such piece. It really does look the part. 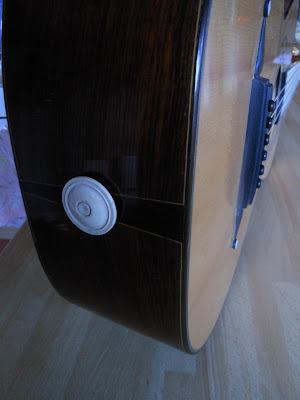 This instrument is currently for sale. Please contact me for more details. 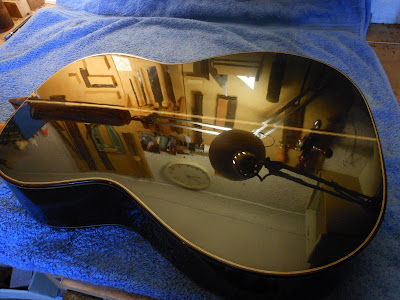 Earlier this week I burnished up Julio's guitar and today I will be fitting Alesi tuners, a nut and saddle and then stringing it for the first time. The shellac finish is looking highly polished and I couldn't resist taking this picture. My tools reflect rather nicely as does the lamp and the workshop clock!

I recently paid a visit to David Dyke over in East Sussex. David has been one of the leading musical instrument maker suppliers for many years now, and many makers who have visited his place in Horam will recognise the scene below.

On this visit I was accompanied by Mike Francis who made a guitar with me a few years ago. Mike has recently returned from a year learning guitar making at Newark College, and had all sorts of tales to tell of his guitar making adventures there... 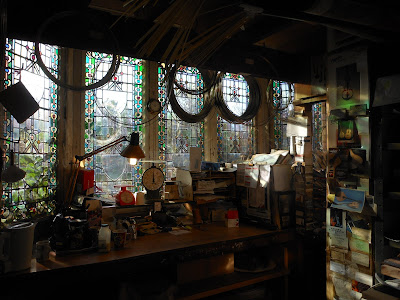 This is David's packing bench. Note the high-tech scales and the rolls of different gauges of fret wire hanging from the ceiling. I was paying a fleeting visit and only needed a few small items, but the next time I visit I will take more pictures as there are always exciting things to see. 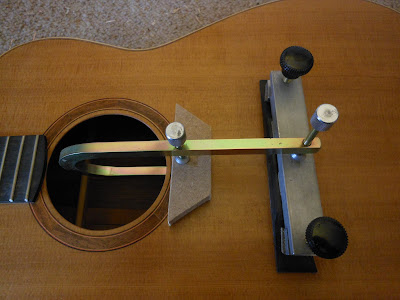 The picture above shows a bridge being glued on to a rosewood and spruce guitar that has a story to it. A few months ago I was commissioned to complete this unfinished instrument, the maker having died some time earlier. His friend, who had been left the guitar, wished to have it completed in memory of the maker. I had made an initial assessment of the guitar, but it was only when I was looking at it the following morning that I realised that there was a signature on the endblock and that the guitar maker was Richard Slack. Although I did not know him well, we had met on various occasions over the past 20 years at local guitar events. Richard turned his hand to making many different types of musical instruments (I remember admiring a fine hurdy gurdy he had made) but I think he was best known for his classical guitars. I had seen him last about 5 years ago when I visited his workshop in Worthing.

Completing this guitar has been a thought provoking process and I have taken as much care as I can with this guitar. That Richard will never hear this guitar is a sad thought indeed but I am sure many of us will leave things unfinished or unresolved. I strung it for the first time earlier this week and to my great delight it sounded lovely; no one could be more pleased than me.
Posted by David Whiteman at 19:10 No comments: