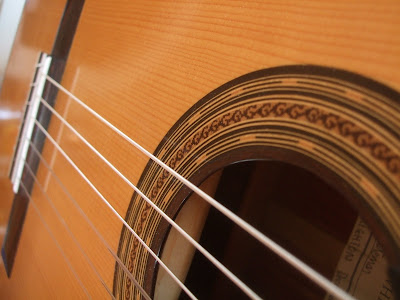 Friday evening and I'm shattered. This week has been something of a watershed; various restorations finished, all the timber picked out of the stacks for Adams guitar, paperwork done, dusted and forgotten about and guitars placed in the hands of their new owners.
Finally word came through that Ryan's guitar has arrived safely in South Korea; that's a picture of it above. Ryan had been pipped at the post to a second hand guitar of mine but I was able to provide him with this one from 1987. It was one of the first guitars I made professionally and I used it for exhibitions and demonstrations..... I then lent it to a professional player for concert work, at the end of which it was in a used condition, so I kept it for myself. Intending to have it as my own playing guitar was a fine sentiment but within months I had used the tuners on another guitar and so it has remained unstrung for over 20 years. I'm pleased that it will now be played and enjoyed.
This week I actually heard some live guitar music. Genaro gave me a ticket to hear his friend Edoardo Catemario play in the Brighton festival at St Nicholas Church, the oldest church in Brighton. Edoardo has a fine collection of guitars and on a previous occasion I heard him play on a Simplicio. On this occasion he was playing on a new guitar imported by Paul Gregory. I loved hearing the Suite Espanola by Gaspar Sanz and it was nice to be reacquainted with the Castelnuovo Tedesco Capriccio diabolico which I hadn't heard for years.
Walking through the darkening streets of Brighton after the concert I marvelled at the exotic place that Brighton has become. I have known it all my life, but sometimes it seems like a foreign country, which I think is a good thing.
Posted by David Whiteman at 20:27 No comments: 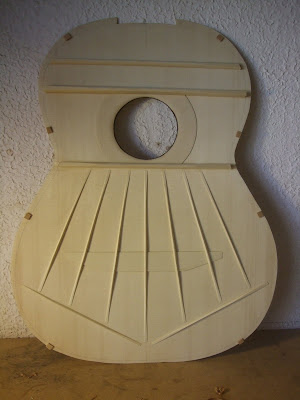 Having been without a usable computer for about a month I can honestly say that it has been a great pleasure not to have one, and I am slightly saddened by the fact that it is now fully serviceable again. Still, it is good to be able to post the odd blog again ( I have had many concerned enquiries about my health) and I have been dealing with a backlog of emails from all four corners.
The workshop has seen a lot of activity however and progress is being made an all fronts. The picture above is of Julio's guitar - the little blocks around the periphery are locating aids for fitting the ribs. I'll be honest and point out that this guitar is rather further on now, but I will save those pictures for a few days time. John's guitar is finished and strung and John is due to pick it up in the next few days; now that is exciting- I hope he is as pleased with the guitar as I am. Repairs have always been there in the background; an endless collection of neck resets and a really satisfying job on Rays hand built guitar. He has just started playing again (its never too late) and it was a pleasure to bring his guitar back to a usable condition.

Posted by David Whiteman at 17:35 No comments: