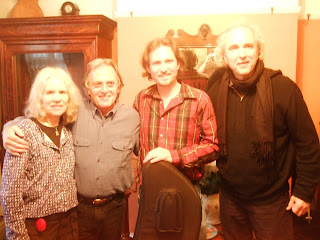 
The phone rang. It was Jim. 'Look, could you get that Panormo finished by Saturday? John wants to play some newly discovered Sor pieces on it! As you're coming anyway you could bring the guitar with you...' As it turned out the 1832 Panormo (French style; ladder braced) sounded grand especially with John playing it (The Sor pieces turned out to be freshly written rather than newly discovered). When I walked in John was playing a harp guitar made by Stephen Sedgwick. I hadn't seen Stephen for over ten years but he's aged better than me. His harp guitar sounded wonderful too. He and John were deep in conversation with Jeff Elliot and Cyndy Burton about harp guitars and guitar making generally. Jeff is one of the worlds finest guitar makers and builds with a simple elegance and a respect for the tradition of the guitar. I first heard one of Jeff's guitars many years ago at the Wigmore Hall played by Julian Bream, and it was lovely to meet him and Cyndy, albeit briefly.
Jim got a bottle of Madeira out from somewhere and we all marvelled at the fact that it was made ten years before the Panormo.
John Doan is not only a fine player but a great guy as well and talks about the guitar with huge enthusiasm. We spoke at length about the relationship between player and maker. Some players just don't get it (believe me, I know) but it was clear that John had a great respect for the makers he has worked with. If you get the chance to hear John play; grab it.
Posted by David Whiteman at 21:16 No comments: 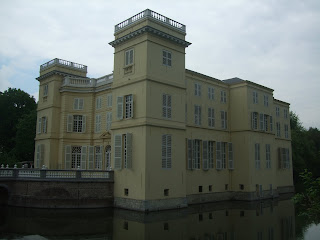 The Cordefactum Guitar Makers Fair in Belgium has been one of the most enjoyable guitar events I have attended and credit should be given to the team from CMB who organised it. CMB is a prominent instrument making school in Belgium and the standard of work on display was fine indeed.
After tunnelling our way under the English channel, and cruising up the N16 through France and Belgium, the calm 18th century elegance of the Casteel d'Ursel was something of relief. It was filled with guitar makers from all over Europe. For me this was a grand opportunity to meet some new makers and players and to renew old acquaintances. Marc Peirelinck (I was at the London College of Furniture with Marc in 1985) was there as he is one of the tutors at CMB. We discussed guitars, old times and more guitars... 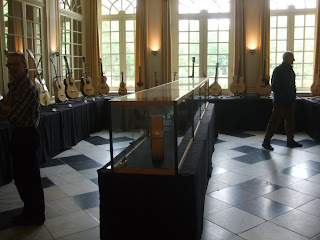 Good also to catch up with James Lister, who is currently one of the tutors at Newark. James had some handsome guitars with him including one with eye-catching kingwood back and sides.
A new face to me was Pete Beer who had some fine guitars on view. Pete pointed out a pike in with the carp in the still waters of the moat...
One of the highlights of the festival was the quality of the lectures and performances. I missed Fabian Zenon but heard many good comments the following morning.
The classical guitar makers lecturing throughout the 3 days were Andreas Tacchi from Italy, Gernot Wagner from Germany and Paul Fischer from the UK. Gernot and Andreas both gave an insight into their personal methods of working; Gernot Wagner has been one of the guitar makers to pioneer the use of laminated or 'double' tops. Paul took a different approach and spoke of the development of 20th century English guitar making. Starting with Dolmetsch at the end of the 19th century, Paul then spoke of his time with the late David Rubio, before concluding with the contribution made by some of the UK instrument making schools such as the London College of furniture and Newark. Andreas spoke of the importance of top selection and the way in which he selects logs up in the mountains and then evaluates the timber. He also spoke of measuring the speed of sound in spruce, a topic that interested many present.

Leaving Belgium late on a mellow Sunday afternoon we had a somewhat unplanned foray into Gent and then coasted back down the almost empty motorway. The soft evening sky looked huge above the flat land of northern France; the channel tunnel felt like a spaceship and Kent was dark and wet. We arrived back home past midnight and I found myself drawn into the workshop, fired up and full of ideas... 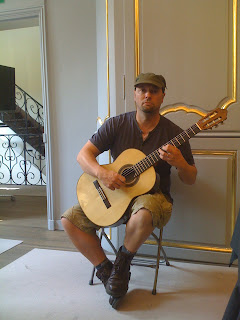 Posted by David Whiteman at 11:47 No comments: