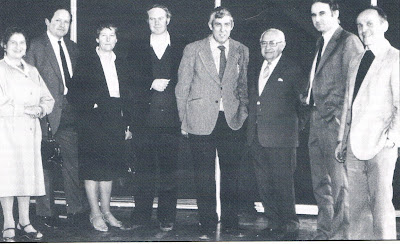 
I have recently heard that Paul Fischer has retired from guitar making after a long and successful career as an internationally acclaimed guitar maker. It seems strange to think that Paul, who has been such a force in UK guitar making will no longer be at the workbench, but I hope he may be able to contribute some of his expertise and enthusiasm in other ways.

I first met Paul in the mid 80's when I was an aspiring guitar making student at the London College of Furniture. Paul made several visits to the college and students found it very encouraging to have his support and encouragement. I remember attending a presentation of his research into alternative south American timbers. Paul had made 8 guitars, one with Brazilian rosewood for the back and ribs; the other 7 using timber that Paul had identified as being suitable alternatives. John Mills played on each guitar (from behind a screen) and a panel was asked to pass judgement on the tonal merits of each one. The exercise was a thought provoking one and Paul's careful research and enthusiasm was inspiring.

Paul started making guitars in what now seems like a different age. If you wanted a good guitar, you would have to go to Spain, or at least, go to one of the few dealers who imported Spanish guitars. Paul can be seen as one of the pioneers of modern English guitar making and did much to promote the craft.
Much to my surprise, I find that I have never played one of Paul's guitars, except  for a rather fine David Rubio guitar, stamped 'PF' but I'm sure I will rectify that one day. In the meantime I wish Paul a long and happy retirement.
Posted by David Whiteman at 21:12 1 comment: