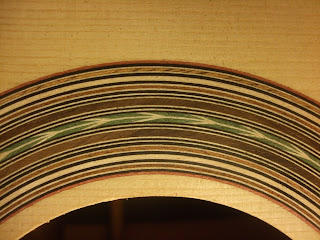 One of the most rewarding moments for me, as an instrument maker, comes when I hear one of my guitars being played well by a fine player. As makers, we sometimes become absorbed by the technical aspects of the instruments we build, so it is always good to be reminded that they need to work well in the hands of guitarists. A week or two ago, I was sent a couple of video clips by a fine American guitarist, Adam Larison. They featured a couple of recent performances he had done with a guitar I made for him last year. Watching the clips, I was excited and  thrilled by how Adam made the guitar sound and it made the stresses of the guitar's export all worthwhile.

Sending this guitar out to the US caused me a lot of sleepless nights. There was the small matter of entrusting a valuable guitar to a shipping company. Having spent many hours building the guitar, the thought of it being thrown around an airport shipping depot is painful. However well packaged (and however fully insured) the guitar is, the thought of it being damaged or destroyed is unbearable.

I dispatched the guitar with DHL, a company I have used before and have confidence in. Picked up from my doorstep, it was soon at East Midlands airport awaiting dispatch. Tracking it on the internet I was dismayed to suddenly find its progress had been halted. A quick call to DHL revealed that an HMRC code number needed to be generated. HMRC were extremely helpful and promised to put this in place, but they work and their own pace (... leaving a lot of time to imagine the worst happening to the instrument).

Eventually the consignment was released  and it was a good moment when I saw that it had arrived at the DHL facility in the US. New York was being battered by Hurricane Sandy at the time, so further delays were fully anticipated, however they did not materialise and soon the guitar was in Adam's hands.

Thankfully no harm had come to the guitar, and Adam's performances on it can be viewed here and here. The first clip is of a complete performance at the John F. Kennedy Centre for the Performing Arts in Washington. Adam Larison plays at about 11.30 minutes into the video, but please listen to the other performances too, they are well worth hearing.

Posted by David Whiteman at 22:42 No comments: