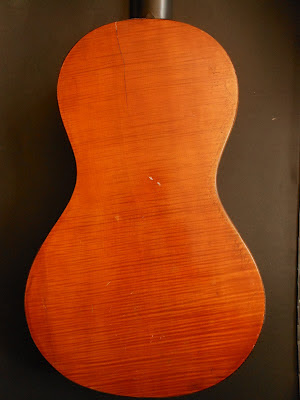 This guitar came in a few weeks ago and has given me considerable pleasure to work on. It was clear, as soon as the case was opened, that the guitar had been considerably altered as is so often the case with vintage guitars. At some point the headstock had been broken off, and had been replaced by a rather inappropriate substitute, complete with unusually mounted modern tuners. The bridge had pulled away and had been replaced by a modern classical guitar bridge which, in turn, had failed. A new fingerboard had also been fitted but, just visible on the soundboard, were the ebony fret inserts that showed this guitar originally had a flush fingerboard. (See the photograph below.) 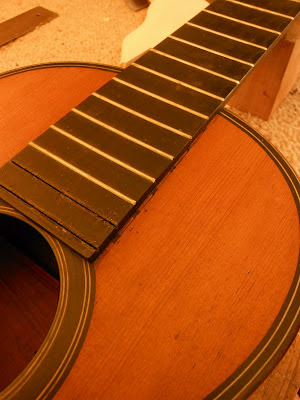 At some point in the past, I was told, the guitar had been taken out to Libya (there is an evocative luggage label from Tripoli on the case) and the hot, dry desert air had caused the guitar to dry out, resulting in some large splits in the top and back.

It was decided that I should take the restoration as far as I deemed appropriate, but that it should certainly be restored to a playing condition. This guitar has had many different incarnations and has been repaired and adapted according to circumstances. At this stage, I feel that the most appropriate course of action is to restore it, as near as possible, to its original state. 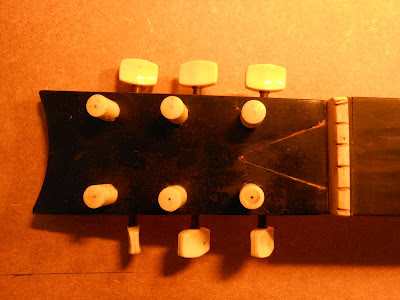 My first task was to try and close the top and back splits by re-hydrating the guitar. In theory, subjecting a guitar to a moist environment should swell the timber and close the cracks. However, sometimes other distortions and tensions prevent this from happening. As I write this, the splits have lessened but not closed completely. 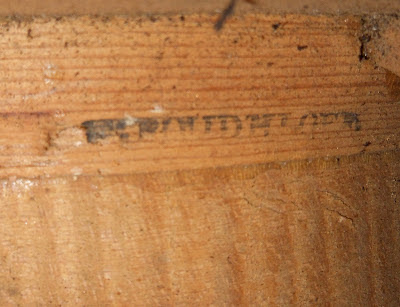 It was only after the guitar had been in the workshop a few days that a close inspection of the interior revealed a very indistinct makers stamp, located on the upper treble side lining at the waist. Although unclear, the stamp is that of F. Roudhloff, a well known French maker from Mirecourt. Francois was the brother of Charles Roudhloff (and not the son, as sometimes believed) and uncle of Dominic and Arnould Roudhloff, who also made guitars.

I removed the old headstock and made a new figure of 8 head, based on that of the C.Roudhloff instrument. The pictures below show part of that process. A v-joint takes either 5 minutes or 5 hours to fit; this one took me 5 hours! 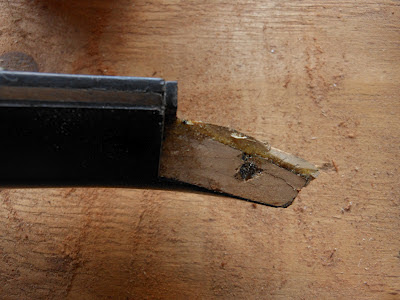 As can be seen from the picture below, the neck is veneered with fine, black ebony on a core of sycamore or possibly lime. The new head is sycamore and will be ebonised at the end of the restoration. 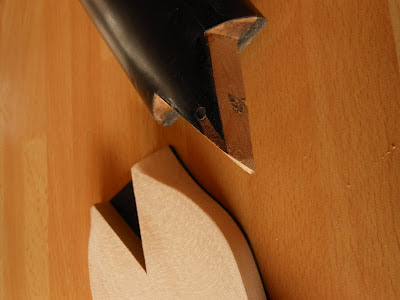 By some considerable coincidence, this week has seen a guitar by Charles Roudhloff in the workshop, so the temptation to photograph the two brothers' guitars together proved to much. The Charles Roudhloff, on the right, is a more ornate guitar with a moustachioed bridge and decorative binding. 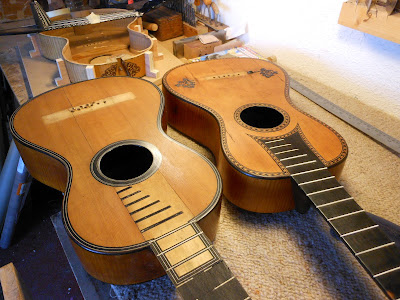 Posted by David Whiteman at 21:07 No comments: 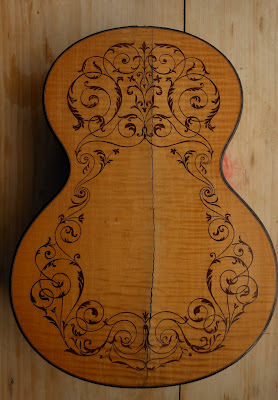 The past couple of weeks have been extremely busy but highly enjoyable.
Firstly, a couple of fine 19th century guitars have been brought in, the most spectacular of which is a Henri Rudert which boasts some very flamboyant decoration. By modern standards this may seem somewhat florid and ornate, but I cannot help admiring the skilful execution of the work. The main work to be undertaken on this guitar is to repair the dramatic back split that runs from end to end of the body. The headstock (shown below) requires a little work, as does the soundboard. 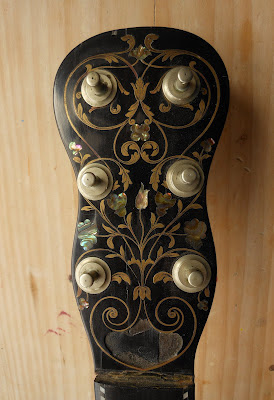 I have also taken in a French guitar which is in need of substantial work to restore it to original condition. It can be seen in the picture below, furthest from the camera.

Those are the guitars that have come in, but I also have three new guitars leaving the workshop in the next week or so. I haven't had time to feature them on the blog, but they are guitars I am very pleased with and I hope their new owners are too. One of these guitars is seen on the workbench for final adjustments and polishing. Hiscox cases arrived earlier on in the week so these guitars are nearly ready to go. 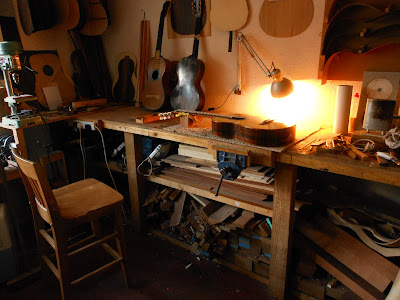 Posted by David Whiteman at 08:59 No comments:

The wood so wild - an Eastertide trip to David Dyke 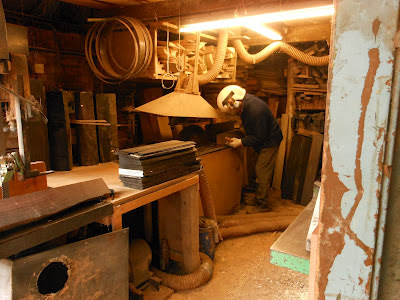 I have mentioned David Dyke on this blog before, and I am sure that no UK instrument maker will be unfamiliar with his name. David has been one of the most prominent and respected instrument making suppliers for many years. David started by teaching guitar making in the 1970's before moving into timber supply, and since then his luthier supply business, based in Horam, East Sussex, has become established in many guitar makers address book. I remember visiting David for the first time in 1984 when I was in my first year at the London College of Furniture. I bought a set of Indian rosewood, some Brazilian mahogany and a set of flamed maple, and was enthralled by the sight of all the timbers, strips of inlay, racks of machine heads and coils of fretwire. 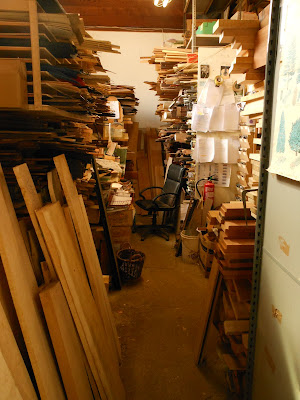 This week was the first week of the Easter holidays and so I combined a trip to David's with a family picnic as the children were not at school. I had a few bits and pieces to pick up, most notably some 1.6 fretwire for my Ries copy, but David was also cutting some rosewood blocks for me and I wanted to see it done. David uses a large circular saw for this job and, although it turns more of the wood to dust compared to a bandsaw, it leaves the timber with a very fine finish. 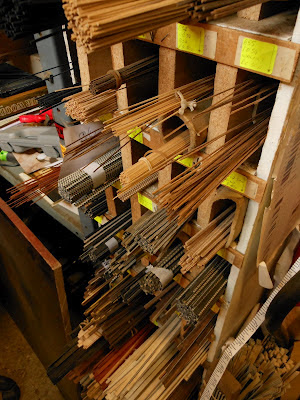 Business at David Dyke's isn't a slick, high-tech affair, but enjoyably laid-back. As I walked in Mike Reid was busy cajoling everyone into signing up to a children's charity competition (hopefully I will win a cuddly toy panda) and David himself was out the back having a brew in one of his sheds. Discussing instrument making with Mike is always fun; Mike has his own business, Small Wonder Music, specialising in inlay products. 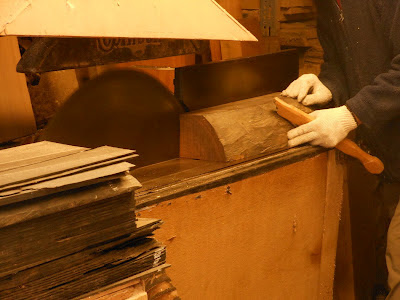 Eventually David powered up his saw and sliced into the blocks of rosewood I had. These were the last remnants of a huge piece that I acquired many years ago. These last blocks were only good for 4 piece backs- jet black with a few pink streaks - and a few fingerboards which I swapped for a couple of sets of English yew. The size of the saw can be seen in the picture above, and the large stack of timber in the foreground is some African ebony that David had just sawn for backs and ribs. 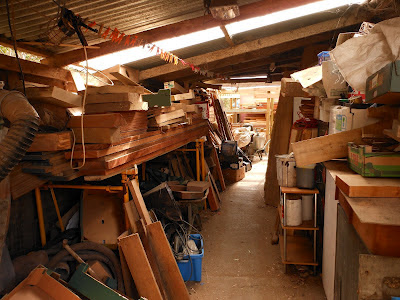 The yard is not the most ordered in the world, but is all the more interesting for that, and David seems to know were everything is. Some new racks were being built when I visited this time, just visible at the end of the shed. I was taken with this violin template below, hanging on the peeled-paint door of the shed. 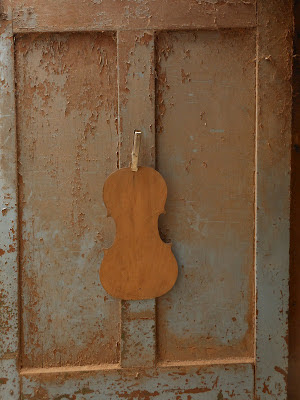 This area of East Sussex is one of narrow lanes, hedgerows and quiet woods. The beautiful river Cuckmere winds its way gently to meet the sea at the majestic Cuckmere Haven, and the dark line of the South Downs can often be seen.

We stopped for our picnic at Arlington and watched the first swallows of spring dipping over the water. The wild oak took my eye, its bare branches in contrast to the green exuberance of the hazel and hawthorn behind. 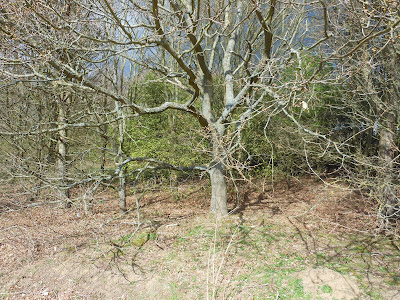 Posted by David Whiteman at 09:18 No comments: