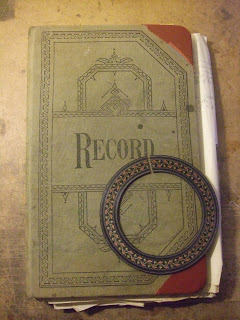 Recently, thanks to my friend James Westbrook, I had the opportunity of examining the log book from the archive material of extraordinary English luthier, David Rubio. The rather grand front of this book is shown above, complete with an unused Rubio rossette. Log book is perhaps not the right title for this document; it is part diary, part note book, part order book. Initially, when I opened this, I was hoping for workbench notes on instruments made or examined, but there was little of this. However, this proved to be a document that inspired, educated and moved me.

David Rubio started building guitars in New York in the early 1960s. A career in medicine had been the intention but colour blindness prevented this. Rubio's skill as a flamenco guitarist brought him into contact with guitars and guitarists, and it was almost inevitable that his interest in making musical instruments grew.

Looking at the beginning of this log book you can see the origins of Rubio's business. Most of his clients at this time were local to New York, perhaps familiar faces to Rubio from his days as a professional guitaris? He also took in repairs; Domingo Esteso is mentioned, and he must have learned much from these instruments. It is quite apparent that David Rubio's reputation and workload gathered pace rapidly. The pages of this book fill as the 1960s progress and some familiar names start to appear. 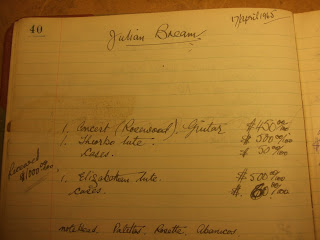 One of the most important names to appear in these pages is that of Julian Bream. The support of Bream must have been important to Rubio, but Bream was also very lucky to find a maker of Rubio's caliber, and to have guitars and lutes made for him. It is easy to imagine Rubio and Bream at the Greenwich Village workshop, discussing instruments and pinning down the details of Bream's next commission. The image is added to by a small technical sketch on one of the pages. It is a detail of a lute by Thomas Goff, and it seems likely that this was Bream's lute that Goff made for him. 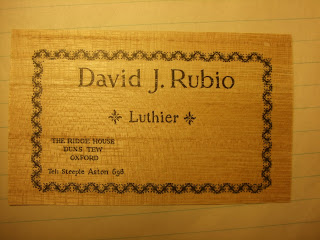 Tucked into the log book are some random documents such as a business card, pictured above, with the Duns Tew address. There are some receipts for wood from Andreas Gleissner (my first batch of 50 spruce tops came from Gleissner) and a fabulous letter from an American client arranging to pick up a guitar from Rubio after his relocation to England. The happy recipient of the guitar insists that he will take David and his wife for a celebratory meal at a restaurant of their choice. 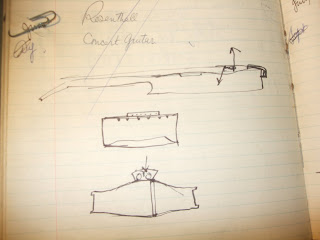 There is much to be enjoyed in this notebook, and it really has fired me up in all sorts of ways. Last year I heard Paul Fischer at the Cordefactum guitar festival in Belgium, lecturing on Rubio and this notebook adds to my knowledge of a guitar maker I have long admired. One thing that is clear is that Rubio was an incredibly hard worker and I have heard that often meals would be taken into the workshop and eaten at the bench while he worked. His passionate curiosity turned him towards early instruments, violins and keyboard instruments. He really had extraordinary talents.

Above all else, this log tells part of the story of a man's passion, of his career and his contribution to musical instrument making. I had the good fortune to meet David Rubio, albeit briefly. I was a student at the London Collage of Furniture and on one occasion David and his wife visited the musical instrument making department and had a look around the workshop. I seem to remember that he recommended we should buy a rather expensive German vice, although that was beyond our reach at that time. Since then I have worked on a number of Rubio guitars and my opinion of him grows - a man of real substance and a fine luthier.
Posted by David Whiteman at 11:56 No comments: 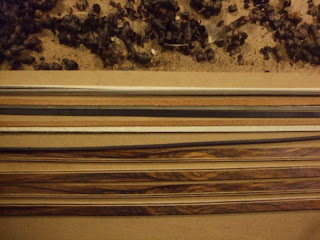 With the main body of John's guitar together, it has been time to move onto the purfling and binding. The picture above shows all the strips laid out on the bench. The cocobolo bindings are all cut from the same board and are in sequence, so the grain follows from one to another. It is a small detail that is missed by many, but gives me a quiet satisfaction. 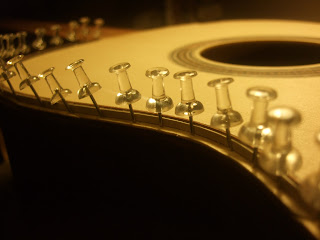 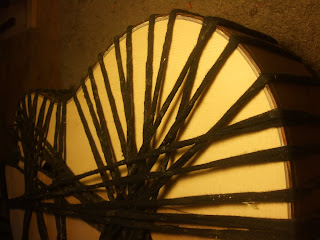 The picture below shows the binding glued in place. The next job here is to scrape it flush with the top and rib. In this picture you can see the finely marked Amazon rosewood. and the detail in the cocobolo. 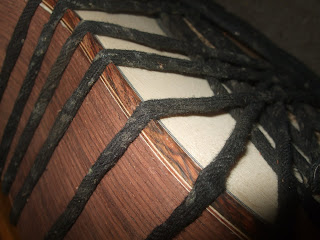 Posted by David Whiteman at 22:45 No comments:

Of mandolins and other things.... 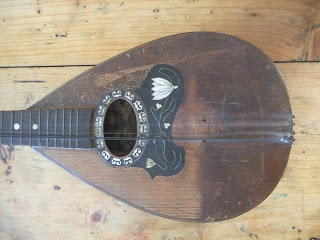 Dating from the early part of the 20th century, this flat backed mandolin is not the most distinguished instrument I have had in recently, but has given me considerable pleasure to put back into playing condition. The picture above shows how much dirt accumulates over time. The original finish on the soundboard appeared to be a coat of sealer and wax, and then added to that were years of grime, more wax and DNA. Cleaning the soundboard is a very simple but enjoyable task; half an hour gently 'washing' the front revealed the aged spruce colour. In the picture I have just completed the first quarter and the contrast is clear.
The top 2 strings were tripled rather than doubled, which for me is a great bonus as it really does give a shimmering tone. 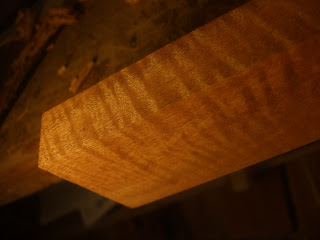 This picture really does not do this piece of flamed mahogany justice. A while ago Frank acquired this lovely piece of mahogany from Bob Smith of Timberline. This week we cut into it and I was the lucky recipient of 3 nicely flamed necks. I just had to run a plane over one of them and revel in the beauty of it. Mahogany is a timber that I am coming to value more and more. I am so looking forward to using this material - it should be just deep enough to cut for V joints. Imagine this mahogany with a burnished French polish....!
Posted by David Whiteman at 11:20 No comments: