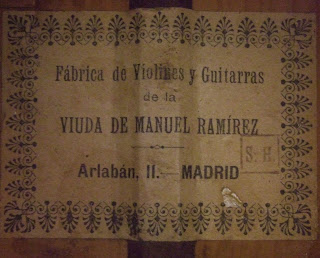 This guitar came into the workshop a few weeks back and really fired me up. It is a Manuel Ramirez, built in 1916. The Ramirez workshop produced many instruments, some built by Manuel Ramirez himself; the others built wholly or partly by craftsmen employed by Ramirez. Some of the notable Ramirez craftsmen were Modesto Borregero, Domingo Esteso, and Santos Hernandez. It is this last name that creates real excitement as Santos went on to become one of the greatest guitar builders of the first half of the 20th century, and his instruments are still revered by makers and players alike. Manuel Ramirez died at the age of 52 in 1916 and the label shows that this guitar was completed after his death. If you study the picture above, you will notice that the initials S.H. are stamped on the label, showing that this was a guitar from the bench of Santos Hernandez. 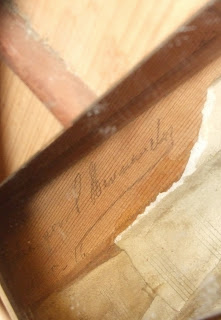 The picture above shows the signature of Santos Hernandez on the underside of the soundboard. 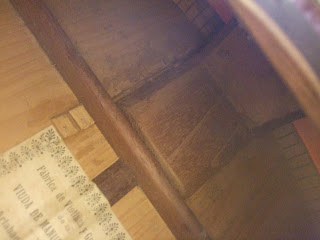 Shot through the soundhole, this picture shows some internal workmanship. 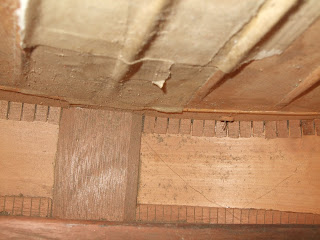 This picture of the inside of the guitar shows some rather heavy handed repair work. Glue soaked material has been used to support some of the splits in the soundboard. 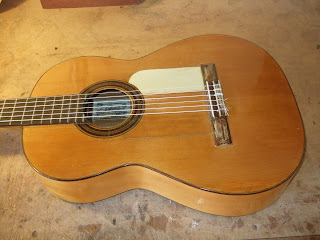 Andres Segovias first great guitar was a Manuel Ramirez guitar from 1912, that was built by Santos Hernandez. It was a source of great frustration to Santos that Segovia refused to acknowledge that this fine guitar was built by him. 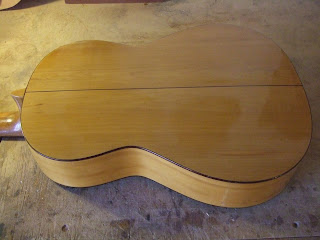 The back and ribs of this guitar are made of Spanish cypress, a wood almost exclusively used for flamenco guitars, although I for one would be very happy to use it for classical guitars. This guitar is definitely a flamenco and has what Stefano Grondona has described as an 'explosive vitality'. 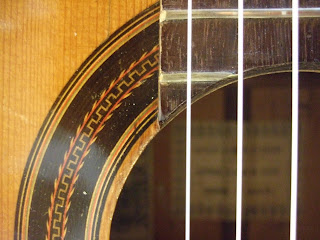 Although showing signs of age and considerable professional use, this guitar is in good, and largely original condition. When you look closely at the workmanship you can see that it is fine indeed. The simple but effective rosette illustrates the crisp and accurate work. 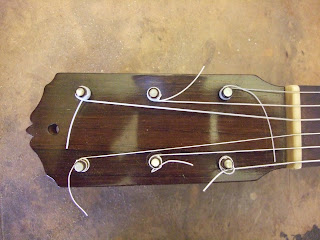 I was delighted to see this headstock as by chance I had used this design for the first time a few weeks before. I was copying a Hauser 1 headstock for a guitar I am building. Herman Hauser saw Segovia's Ramirez/Hernandez and occasionally adopted this design, although he is usually associated with the 3 lobed design of Torres. 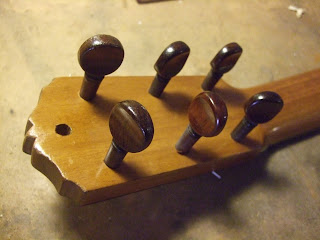 The hole in the center of the headstock is for a cord or ribbon that can be used to hang the guitar on the wall. 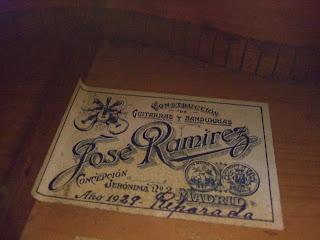 This repair label shows that the guitar was repaired in the Jose Ramirez workshop in 1929. The picture below shows the label on the original case. 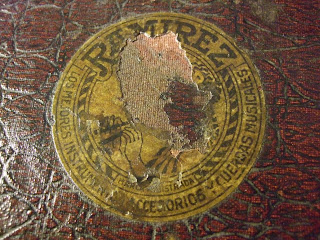 Posted by David Whiteman at 19:05 No comments: 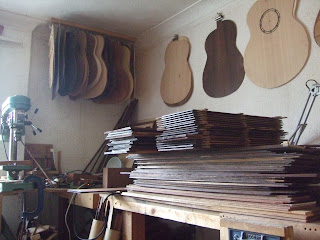 This is how my workshop has been for most of this week and I have a suspicion that it is going to be like this for a few days more. The picture above is part of my stock of Rio back and sides. Once this is used up then that's it; I'm not buying any more. Most of my material has CITES certification although a few sets do not. (That was some timber that I bought years ago from a retired cabinet maker up in Essex.) I had all my Rio rosewood out to select a couple of sets for 2 guitars that I am going to built in 2011 and at the same time to photograph each set.
One of the reasons for sorting through all the Brazilian was to select some wood for a guitar that Julio ordered last week. It was good to meet up at last. I'm very much looking forward to making his guitar and hearing him play it. 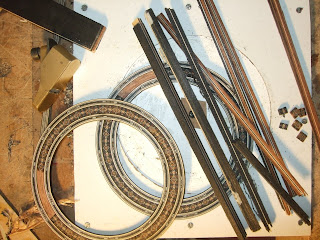 I have just finished a couple of rosettes and I have another one to finish tomorrow. I like making these although it would be far cheaper and efficient to buy them as some makers do. This inlay is such a personal touch that I cannot imagine using a shop bought one. Although my rosettes have similar elements, each one is nevertheless subtly different and this year I am going to introduce a couple of new designs. This week I shall be dropping these rosettes into the soundboards I have selected and also continuing to work on the current guitars on the bench. Oh, and I will spent a bit of time each day polishing, naturally!
Posted by David Whiteman at 21:53 No comments: 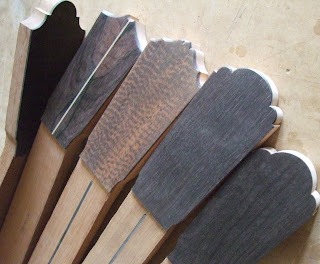 The memory of the hot summer is receding now and the workshop is returning to being a snug refuge from the cool seasonal weather outside. Looking out to sea the other day I saw a flock of brent geese fly westwards to their winter feeding ground, at Pagham harbour perhaps. They have spent the summer high in the arctic.
As the picture above shows, I have been busy making necks; there are a number of different headstock shapes here including Torres, Hauser, Friederich and Whiteman. Included here is the neck for Johns instrument, and a short scale guitar that one day I will finish for my children. I have also finished some bridges including this rather colourful rosewood one. 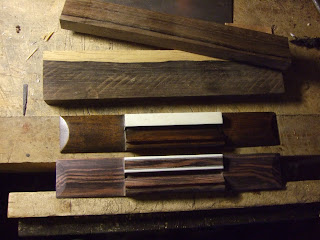 There have been many visitors to the workshop over the past couple of weeks. Most unexpected was Kai Heumann and his partner travelling back to Germany from Scotland. Kai, a fine professional guitarist also runs a guitar shop and a fabulous looking cafe. This looks like somewhere I would like to visit, drink coffee and listen to music...

Posted by David Whiteman at 12:51 No comments: