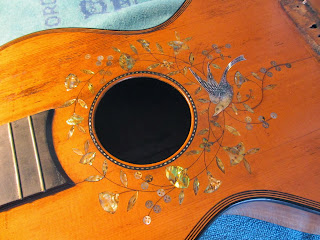 This guitar was a recent restoration commission, which I have now finished and returned to its owner. It was made in Mirecourt in northern France in 1880 in the Cherpetal workshop. It has to be said that late 19th century guitars are not in the same league as some of those instruments from the first half of the century. This particular guitar is quite robustly built and lacks the constructional delicacy of many earlier guitars; consequently the guitar is quieter and less resonant than one would wish for. However, when I lifted this guitar from its case I was struck by the pleasing ornamentation, the plain but attractive satinwood back and sides and the astonishingly bad repair that had been carried out to the bridge! The bridge had come off at some point and had been glued back roughly into place and then screwed onto the soundboard for good measure. The bridge and the surrounding soundboard had then been painted over with a thick black paste in an attempt to disguise the damage. The rest of the guitar was in fair condition; a small section of ebony binding loose and in need of reglueing, an ugly top split and the obligatory loose soundboard brace. Oh, and the table and back and sides had been crudely overfinished. 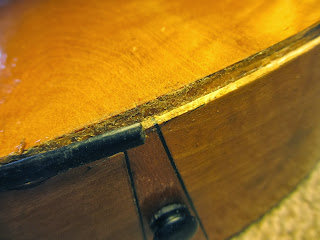 The picture above shows the loose ebony binding on the base end of the guitar. 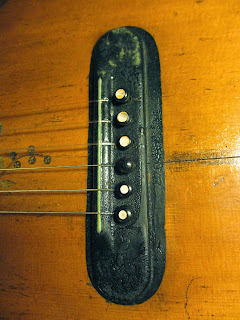 This picture shows the bridge before restoration. I never did quite work out what that black finish was but it certainly lacked finesse. You can just make out some of the screws that have been installed in an attempt to stop it from parting company with the soundboard. The original bridge was found to be too badly damaged to consider re-using so an ebony replacement was made in the same style. 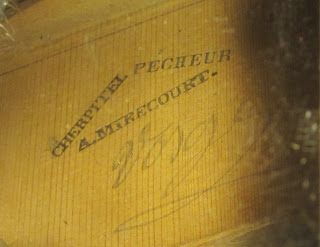 This stamp was found on the underside of the soundboard, along with the date and signatures of some of the craftsmen of the workshop. It is always good to find this information inside a guitar.
To my delight the overfinish came off beautifully leaving a lovely flat and original  original finish. The overfinish appeared to be some sort of shellac and was painstakingly removed with alcohol soaked swabs. 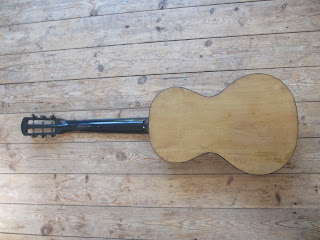 2 pictures of the finished guitar. 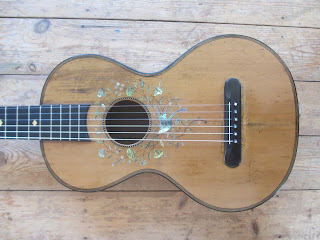 Old guitar cases can be time capsules. An old paper bag from a musical instrument shop in Burton on Trent contained packets of strings including  these 'Cathedral' strings. The packet proudly boasts 'British Music and Tennis Strings'! 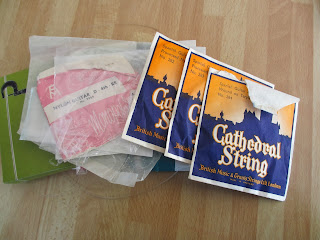