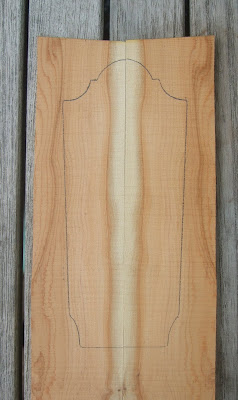 A few days ago I had a break from the workshop and spent some time walking through Kingley Vale, the largest ancient yew forest in southern Europe . Amongst the trees there is a grove of majestic, twisted yews that are believed to be around 2000 years old. English yew is a remarkable tree and has become immersed in English folklore.

The wood of the yew is most commonly used for the traditional longbow and I have promised myself that one day I will make one. It is not widely used in guitar making, although I regard it as an English 'exotic' timber that can rival some rosewoods in appearance. It is, of course, a softwood but with an even and smooth texture. Often it shows wild graining and it is difficult getting clear timber big enough for guitar backs and ribs. I use it for small details such as purfling and binding, or for headstock facings, such as the one above.