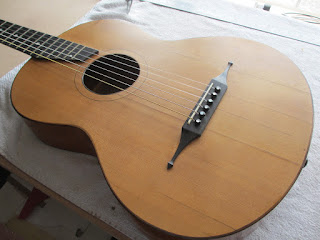 There are some guitars that are guaranteed to attract attention and the guitars of Herman Hauser definitely fall into that category.


This guitar come in recently for appraisal. It is from the first part of the 20th century, although the date on the label is illegible. Hauser is best known for his Spanish style guitars that were played by Segovia, Bream and many others; this guitar is one of his Viennese style instruments, owing more to a Northern European (and late 19th century) style of making. Sometimes these early Hauser guitars disappoint me, but this one did not. It has a wonderful tone, with particularly brilliant trebles. 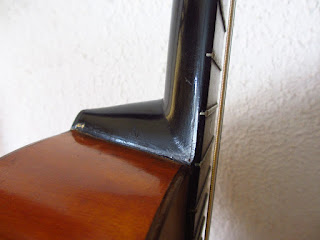 The top is European spruce with a simple transverse bracing and the back and ribs are of nicely flamed maple. This guitar is definitely in the 19th century style and the ebonised neck and 'ice cream cone' heel reflect that. The decoration on this guitar is delightfully understated with a single binding on the top, the sound hole defined rather than decorated and the functional headstock dark and austere. 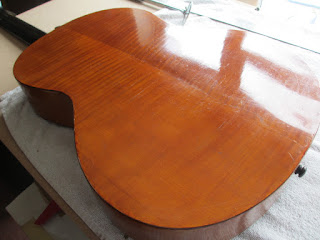 I find that whenever I examine a guitar I learn something from it. The understated simplicity of this guitar resonates with my own thinking at the moment as I am experimenting with simple lines and decorative motifs in my own work. 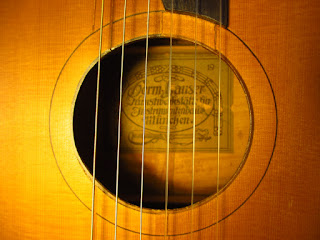 This guitar is currently for sale - sadly its not mine, but I am happy to pass on any enquiries to the present owner. I believe it has been authenticated by Herman Hauser III and is in fully playable condition. It has had work undertaken on it in the past but is a lovely example of this maker's early work.

Here is a link of the guitar being played. 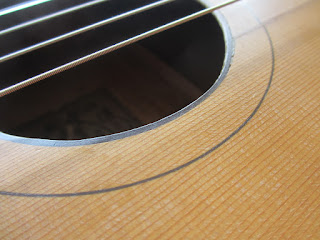 Posted by David Whiteman at 16:29 No comments: